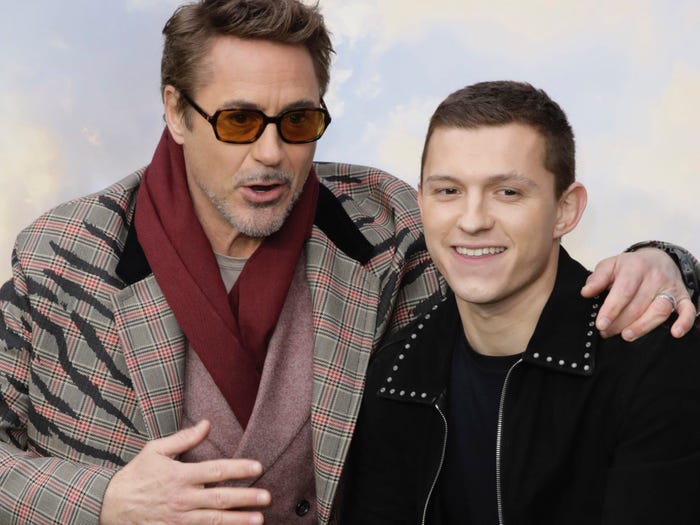 Tom Holland and Robert Downey Jr. had a sweet exchange over social media about a shared jacket, and Marvel fans are loving it.

On Wednesday, Holland posted a mirror selfie on his Instagram story, which showed him wearing a red fleece zip-up jacket from Stussy over a yellow Nirvana T-shirt.

He captioned the photo: "Looking after your jacket mate!"

At first glance, it might have been unclear who the "Spider-Man: Far From Home" star was referring to, but eagle-eyed fans noticed a tiny tag for Downey Jr.'s Instagram account placed between two of the wall mirrors.

Downey Jr. saw the post and reshared it on his story with the caption: "#ThankYou Brother." The repost also included a GIF of a sparkling red jacket.

This isn't the first time Holland has been seen in the aforementioned jacket.

Back in December 2017, the 24-year-old actor shared three images of himself in a makeup trailer in Atlanta, Georgia with the Instagram famous dog @georgiegirlthepom.

In his caption, Holland tagged makeup artist Heba Thorisdottir (who previously worked with Holland for "Spider-Man: Homecoming") and said that he was "styled by @robertdowneyjr."

It's unclear if Downey Jr. gave it to his "Avengers: Endgame" costar as a gift or let him borrow it indefinitely.

He was also seen wearing the jacket later that month when he visited patients at a trauma center in Atlanta called Grady.

Since then, it has also been spotted in fan photos taken in Cleveland, Ohio (where he filmed the upcoming movie "Cherry") in December 2019.

After seeing the latest social media interaction between Holland and Downey Jr., fans took to Twitter to gush about the costars' friendship.

Holland and Downey Jr. met through their roles as Spider-Man/Peter Parker and Iron Man/Tony Stark, respectively, in the Marvel Cinematic Universe.

They first shared the screen together during "Captain America: Civil War (2016) after Tony recruited the teen webslinger from Queens to join his team.

Holland has also spoken about how Downey Jr. has been a mentor to him on-screen and in real life.

In 2019, the British actor told Seth Meyers that he had Downey Jr.'s name saved in his phone as "The Godfather" and he worried that their friendship was over after he accidentally hung up on the "Iron Man" star.

In another interview, Holland also said that filming the "Spider-Man" sequel without Downey Jr. "was really emotional."

"I've only ever made a 'Spider-Man' movie with Robert and he's a great friend of mine," he said.

Then, while appearing at a convention in fall 2019, Holland praised Downey Jr., calling him "kind" and "caring."

He also said that while on set for "Civil War" — which was Holland's first MCU movie — Downey Jr. "kind of looked after me and took me under his wing a little bit."