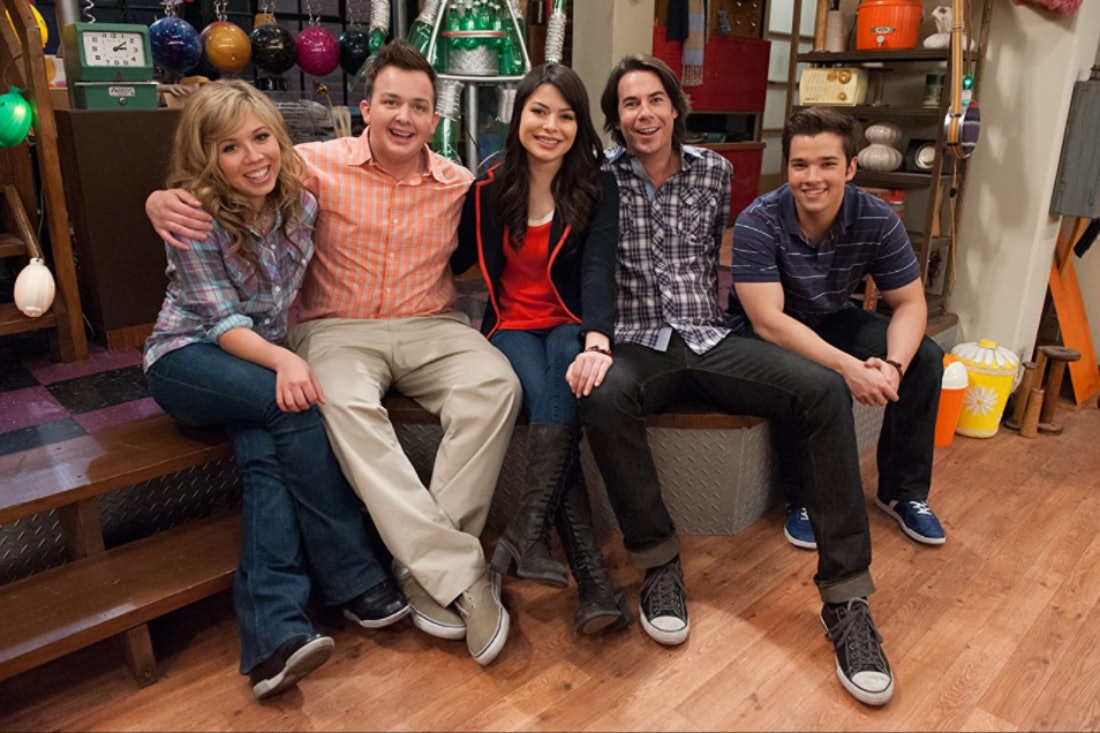 Instead of saying “iGoodbye” like Miranda Cosgrove did when iCarly was filming its final episode in 2012, the Nickelodeon alum is getting to say “iHello” again soon. On Friday, May 14, Paramount+ announced the news fans wanted to hear. After waiting months since the first confirmation of an iCarly revival, there’s finally more info about Paramount+’s iCarly revival, including its release date, cast, trailer, and more.

In case you missed it, ViacomCBS first confirmed the news about an iCarly revival coming to Paramount+ on Dec. 10, 2020. The confirmation revealed that Miranda Cosgrove would be returning in the title role, but there wasn’t a lot more information. The original iCarly series premiered on Nickelodeon in 2007 and ran for six seasons, drawing in 6.4 million viewers for the 2012 series finale.

The sitcom was one of Nickelodeon’s biggest hits in the early aughts. Featuring Carly Shay’s (Cosgrove) pursuits for internet fame through her web series, iCarly, the show-within-a-show aspects were pretty unforgettable. She filmed consistently at the apartment where she lived with her older brother and guardian Spencer (Jerry Trainor). Carly filmed her web series alongside her bestie Sam Puckett (Jennette McCurdy) and friends Freddie Benson (Nathan Kress) and Gibby (Noah Munck).

Paramount+ finally gave fans more to know about the upcoming revival on Friday, May 14, including some tidbits about the cast.

Paramount+ announced the official release date of the iCarly revival on May 14 in honor of Cosgrove’s birthday. As the star turned 28, the streaming platform owned by ViacomCBS revealed Season 1 of the revival, which will be 13 episodes long, will premiere on Thursday, June 17.

Back in December 2020, Cosgrove was one of the first members confirmed to return to the show. In those initial reports, it was also revealed that Trainor and Kress would also reprise their roles.

Meanwhile, fans wondered if McCurdy would star in the series to reprise her role as Sam. Naturally, fans took to Twitter to ask producer Jay Kogen, who was kind enough to answer fans’ questions. Kogen’s replies basically confirmed it was totally up to McCurdy if she would want to reprise her role, and if she chose not to sign on, they wouldn’t recast the character Sam.

Amid the speculation, McCurdy revealed she quit acting in a Feb. 24 episode of her podcast, Empty Inside, and had no plans to return to the profession.

However, fans will get to see some new faces on the show. Lacy Mosley will play Harper, Carly’s bestie and roommate. Also joining the show is Jaidyn Triplett, who plays Millicent, Freddie’s stepdaughter.

The iCarly revival will begin 10 years after the end of the OG series. The official series description says you can expect to see Carly Shay and her friends navigating work, love, and family in their twenties.

As for Spencer’s part on the show, he’s obviously no longer Carly’s guardian, so their dynamic will probably look a lot different.

Paramount+ has yet to drop a trailer for the iCarly revival, although the network did share a cute video celebrating Cosgrove’s birthday (and the subsequent premiere date of the show) on what appears to be a potential set for the series.

As you’re waiting patiently for the iCarly revival to drop on June 17, you can always stream the OG series on Paramount+.

If you don’t have a Paramount+ subscription, you can get a 7-day free trial when signing up. The service costs $5.99 per month for its basic subscription.