Jimmy Kimmel made a joke about Vice President Mike Pence, who received the COVID-19 vaccine on Friday morning.

During the opening monologue on his show Thursday night, Kimmel was speaking about the nor'easter that hit the East Coast. He then went on to make a joke about the vice president and his wife.

"He and his wife Karen will be doing it on television to show that the vaccine is safe. I guess the thinking is if it's good enough for 'America's First Karen,' it should be good enough for the rest of them too," he said on "Jimmy Kimmel Live."

After noting that Pence wrote an op-ed for the Wall Street Journal in June dismissing a "second wave" of the coronavirus, Kimmel said the vice president shouldn't get the vaccine.

"So maybe save that dose for someone else," Kimmel quipped. "The only cure Mike Pence should get right now is a bottle of Clorox and a heat lamp."

In remarks after his shot, Pence called the speed with which the vaccine was developed "a medical miracle." 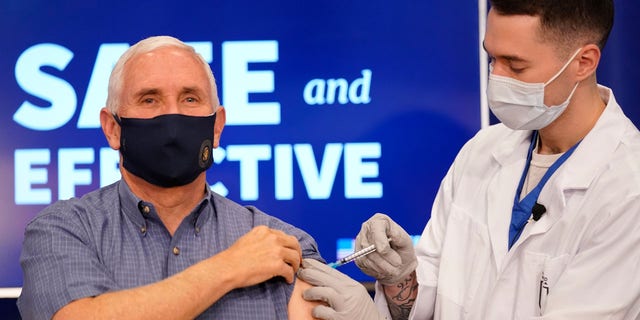 "The American people can be confident: We have one and perhaps within hours two" safe vaccines," Pence said, referring to expected FDA approval for Moderna’s vaccine. Pfizer-BioNTech’s vaccine was the first to be approved. "Building confidence in the vaccine is what brings us here this morning," he added.

10 ‘The Queen’s Gambit’ Quotes That Deliver An Emotional Checkmate