How FaZe Clan Snagged Investment by Jimmy Iovine During a Pandemic

Gaming entertainment network FaZe Clan closed on a multi-million dollar deal this week in the midst of the coronavirus pandemic, giving the esports company a boost for its roster of 85 video gaming influencers along with the ability to expand its merchandising.

Chief Executive Lee Trink told TheWrap that while the team is working remotely, it closed on the investment from NTWRK, the mobile e-commerce company founded by Aaron Levant and Jamie Iovine, son of music producer and record executive Jimmy Iovine, who also is an investor and limited partner in the company.

Trink, who previously worked as president of Capitol Records, leveraged his music industry connections to bring in Jimmy Iovine, who is now also a board member of FaZe.

“We’re at the birth of a new disruptive entertainment genre,” Iovine said in a statement Thursday. “FaZe Clan is a very powerful pipeline into gaming culture and their cultural impact reminds me of the early days of 90s hip hop.”

FaZe doesn’t own a team, but it co-operates the Atlanta FaZe, which competes in Activision Blizzard’s competitive Call of Duty League. The rest of the company’s effort is dedicated to managing a roster of online gaming influencers, who spend their days producing gaming and lifestyle content and repping the brand.

Trink wouldn’t disclose the amount of money raised but confirmed it was a “multi-million” dollar round. Forbes valued the company at roughly $240 million after the new funding. Trink spoke to TheWrap about how FaZe, which celebrates its tenth anniversary this year, managed to raise money during a pandemic and its upcoming initiatives.

The following has been edited and condensed for clarity.

Why hasn’t FaZe Clan raised much money since its launch in 2010?

The amount of money we raised is not that exciting, partially because we don’t need a lot of money. We’re already a highly valued company, and it is not super capital-intensive to do what we do, especially compared to other esports organizations that are spending up to $50 million just for a slot for a team.

What will the new funds be used for?

The money that we’re spending is mostly on personnel, almost entirely on personnel if you include talent. We’ve got a staff of nearly 80 people. It’s really human capital, that’s the biggest chunk.

Yeah. I’ve known Jimmy for quite some time, (and) there were two different instances where I almost went to work for him during my music career. It’s exciting that we finally get to really connect and work together. I’m very familiar with his work in the music industry, so it’s exciting to connect with him in a different business.

What motivated Iovine to get NTWRK involved?

What he sees is the growth of esports, but also he really sees that this is a cultural wave. This is kind of the new frontier for what is leading culture. What’s funny is, I used to make the comparison to (esports and) hip-hop… and for him to co-sign that idea is thrilling to me, and certainly a vindication on some level. Here’s a guy who helped create hip-hop, and he speaks with much greater authority on what hip-hop’s ascent was in comparison to what we’re doing. And that’s really it. We’re a cultural wave: (Gaming) is this unusual intersection of so many cultures. 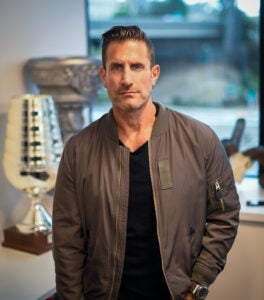 What does NTWRK do, and how will that help FaZe?

NTWRK brings a wealth of product experience to the table. They do the manufacturing and all of the back-end process of the merch. We very much continue to be brand stewards ourselves; we haven’t abdicated that role, and we have all approval rights on creative aspects. It’s important that we retain control of what the brand looks like. But they’ve got a team that helps us with the design, manufacturing and a lot of the strategy around merchandising. And they also bring relationships. Jimmy’s Rolodex is second-to-none. He brings more than just capital.

Tell us a little bit about how your previous career as a music executive prepared you to run an esports business.

The music business and the part of the business that involves breaking bands and artists gives you a phenomenal tool kit for what we’re doing at FaZe Clan. I’ve pulled in a number of people from the music business. And we all talk about this feeling about breaking a band — there’s a feeling in your stomach when you know you’re breaking them because you’re looking for any sign that things are going to pop. And it feels like I’m breaking the biggest band of my life with Faze Clan. I’ve been at FaZe Clan for almost five years now, and my experience of looking for talent is the same (as the music industry).

Who is FaZe Clan’s competition?

FaZe Clan is defining what gaming culture is. We are the market movers in this space, and we do it in a way no one else has been able to come close to. 100 Thieves is making some moves on the apparel side, but they don’t move the market or culture. They’re doing a great job on their apparel business. I think they help elevate gaming through what they’re doing there. Actually, we’d be better off if there was another entity to help to do what we do, to help define the market so we are not an anomaly.

We have to at some point mention the pandemic. How is FaZe Clan coping with COVID-19?

There’s obviously a transition to working from home. But I think there’s more opportunities for us to capture during this time: We are one of the very few sport and entertainment companies that are able to still be active. We can actually demonstrate that the show must go on. We have kind of a unique spotlight on gaming now, and we have the opportunity to demonstrate to a lot of people why they should be excited about it. It’s a shame that it’s during something that’s this serious; we really are in the middle of a global crisis. The reality is, it is likely, if not certain, that Faze Clan will come out of this bigger and stronger with more opportunity as a result of the rest of sports and entertainment standing down. There are benefits to it.

What about esports and gaming advertising? Is that affected at all by the pandemic?

From an advertising standpoint, dollars have constricted and opportunities for (chief marketing officers) to deploy their capital have shrunk. The other thing is that CMOs have had the ability to ignore gaming and not immerse themselves in tackling the learning curve necessary in order to properly use their capital in gaming. And now, when traditional sports seasons are shut down, and new entertainment productions are shut down, now they’re forced to say, ‘OK, I’d better immerse myself in how to do this.’