Ella Emhoff and her boyfriend Sam Hine were affectionate while enjoying the water in the sunny weather outside of their $5,600-a-night Eden Roc D’Antibes hotel.

Ella Emhoff, 22, looked totally smitten with her boyfriend Sam Hine, 27, during their latest photographed outing. The lovebirds were spotted enjoying time outside their fancy hotel, Eden Roc D’Antibes, which is estimated to cost a whopping $5,600 a night, on the French Riviera. The stepdaughter of Kamala Harris, 56, wore a stylish red one-piece swimsuit while the GQ editor went shirtless while wearing patterned shorts. 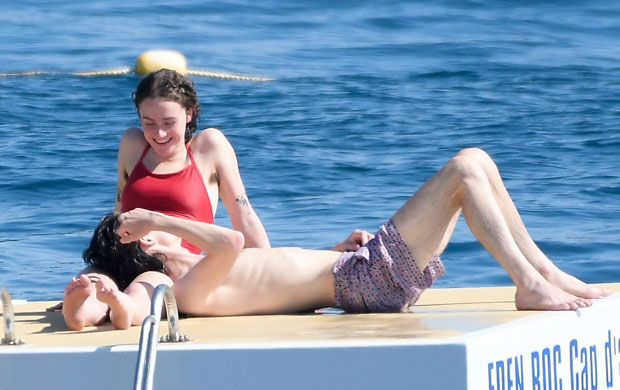 The young couple spent some time in the water and looked like they were having the time of their lives. They were also seen hanging by the water and showing off PDA while laying under the sun together. At one point, Sam even rested his head on Ella’s legs while she sat up and looked down smiling at him.

Just a few days before their latest fun, Ella and Sam were seen kissing on a boat during their French getaway. They were also toasting drinks and snapping selfies while taking in the the gorgeous view on St. Tropez. The model rocked a green bikini that was just as flattering as her recent red swimsuit. 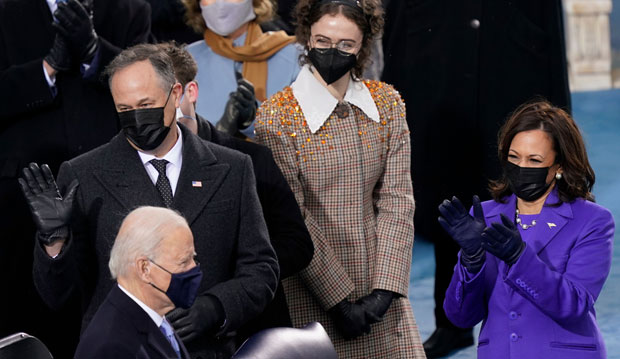 Before their recent French outings, Ella and Sam first sparked romance rumors when they were seen in Feb. They enjoyed outings around New York many times since then, including eating at a restaurant in Chinatown together. They were also seen holding hands in the West Village in Mar. and strolled around Manhattan in May.

When Ella’s not spending time with her hunky beau, she’s working hard in her career as a model. After signing with IMG Models earlier this year, she’s already posed for some epic photos and made her modeling debut at New York Fashion Week in the Proenza Schouler fall 2021 show in Feb. She also graduated from The New School’s Parsons School of Design, where she took up knitwear, in New York City in May.

Kamala, who Ella lovingly refers to as “Momala,” took to Instagram to congratulate her on her graduation by posting a cute photo of the two of them smiling and posing along with a sweet caption. “Congratulations to our daughter Ella on her graduation. I am so proud of you. Keep dreaming with ambition and there is nothing you cannot achieve. Love, Momala,” it read.