Generally when the police and FBI are quiet about investigations, it’s to protect the innocent. Unfortunately it kind of feels like their silence right now about the Kiely Rodni case might be keeping an innocent person in the crosshairs.

As we reported earlier this week, a slew of so-called internet sleuths believe with very little evidence they’ve figured out what happened to the 16-year-old, who went missing for two weeks after a high school party in Truckee, California — and was sadly found dead in her car at the bottom of the Prosser Creek Reservoir.

They’re not only blaming her boyfriend, they’re sending the kid death threats over it! According to insiders, Jagger Westfall already spoke to authorities and has a solid alibi. The source told The Sun on Tuesday:

“Jagger was in Napa Valley until 8am on the Saturday. He didn’t get back to Truckee until noon and then joined the search to look for Kiely… He has proof of him not being in the area and has spoken with police and the FBI and given them the information.”

But these conspiracy theorists aren’t buying it. Why? It seems to come down to a moment in the video put out by Adventures With Purpose.

AWP are the volunteer divers who finally found Kiely’s remains when the local police couldn’t. They do this kind of thing all the time and post their findings on YouTube. But in this particular video, part of their investigation included speaking to an alleged eyewitness who put someone kinda sorta meeting Westfall’s description maybe with Kiely at the time of her disappearance. Nick, who works for a roadside assistance company, told AWP he saw a girl he thinks was Kiely with a boy wearing a “black San Francisco ball cap, facing forwards” near the Boca Reservoir. Nick says he helped the girl after her car broke down, possibly on August 5, the day before her late night disappearance — or possibly the next day, when the search had already begun. He also said he was suspicious of the boy.

This shaky testimony has folks on the internet ready to convict and execute Jagger. Why? He wears a San Francisco Giants cap. 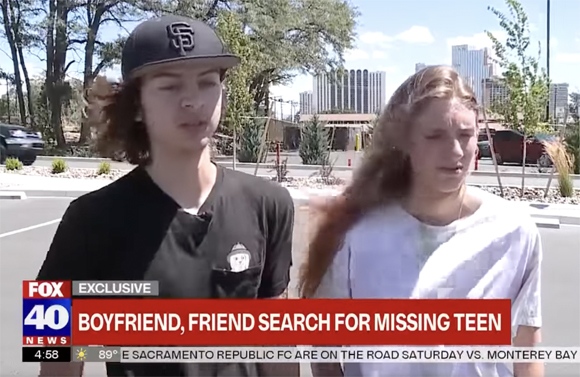 Well, a member of Adventures With Purpose is speaking out after learning about the death threats being sent to the teen. Doug Bishop told The Sun:

“As far as the young man by the name of Jagger is concerned, we never mentioned his name. And the hat that was referenced that I think everyone is trying to draw to him, there are millions of those hats that are sold.”

It’s true, Truckee is less than three hours from San Francisco. We imagine there are quite a few kids wearing Giants hats in the area.

Doug wants to make it clear AWP does not support treating the kid like a suspect, saying:

“As an organization, we do not consider anything like that to be possible, he’s not a suspect, and we never named him as a suspect whatsoever. Now, those conclusions are being drawn and it’s unfortunate, but the FBI has completely ruled him out.”

“Obviously we don’t want there to be any unnecessary harm on anybody, that’s not being done by us. This case was in national headlines and being covered by web sleuths before we even came to town. The main thing that the public needs to understand is we have never named that young man, nor will we ever.”

As for Jagger, well, he obviously isn’t too happy with AWP. They may have brought the search for Kiely to an end, but for some it can also be argued they kind of implicated him in the mystery surrounding her death. An insider said the teen is upset about the video being put out altogether:

“He thinks the video was for clout and he got so much hate on social media. Jagger feels they made a mockery of this terrible accident. It disgusts him and he’s made it known.”

“Kiely’s family is supporting him, they do not think he was involved and he is even living with them at the moment.”

We hope that’s enough for people to STOP SENDING DEATH THREATS TO A TEENAGER, something they shouldn’t have been doing in the first place.

As we’ve reported, we’ll learn more when Kiely’s autopsy results are released in November. Until then, these internet sleuths need to chill out!

Brian Laundrie Search Has Already Cost $1.2 MILLION – And His Parents May Have To Pay!

All the Times Leonardo DiCaprio Tried to Hide in Plain Sight: Pics