A BRIDE has been slammed as ‘obnoxious’ for demanding seven wedding dances, complete with costume changes, roller skates and hover boards.

While a first dance is a traditional for newly-married couples, one bride and groom-to-be seem to be taking things too far with their set list, roping in family members and props. 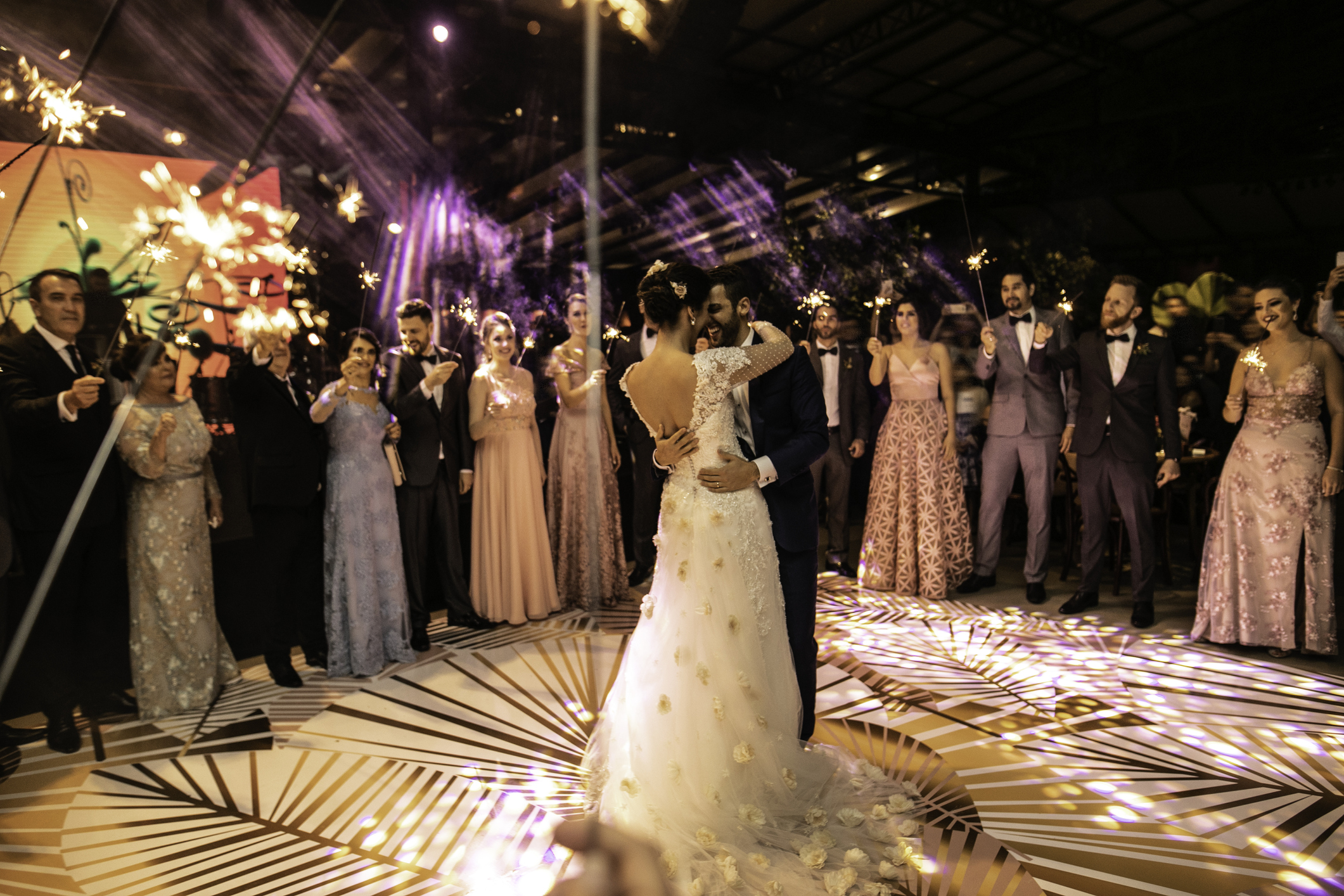 A text has gone viral after it was shared on Reddit, detailing the extensive numbers guests are supposed to sit through.

The bride wrote: “We’re having so many.

“Parents dance, us and our parents. 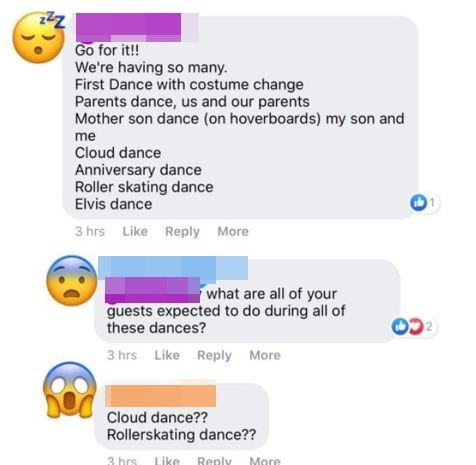 “Mother son dance (on hoverboards) my son and me.

Clearly horrified, one pal replied asking: “What are all of your guests expected to do during all of these dances?” 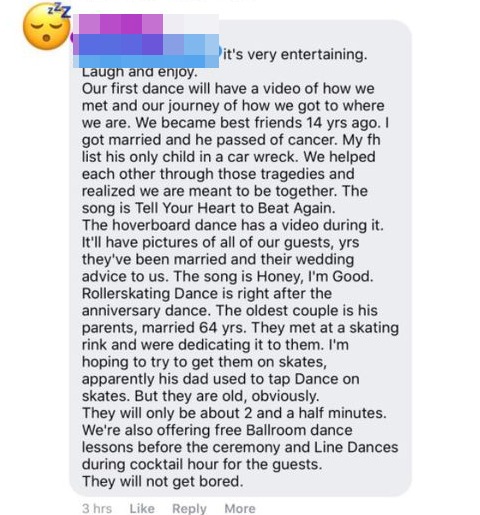 But the bride was defiant, and while she explained the sentimental reasons behind the dances people weren’t convinced.

She wrote: “It’s very entertaining, laugh and enjoy. Our first dance will have a video of how we met and our journey of how we got to where we are.

“We became best friends 14 years ago. I got married and he passed of cancer. My fh [future husband] lost his only child in a car wreck.

“We helped each other through those tragedies and realized we are meant to be together.

“The song is Tell Your Heart To Beat Again. The hoverboard dance has a video during it.

“It’ll have pictures of all of our guests, yrs they’ve been married and their wedding advice to us [sic].

“The song is Honey, I’m Good. Rollerksating dance is right after the anniversary dance.

“The oldest couple is his parents, married 64 yrs.  They met at a skating rink and we’re dedicating it to them.

“I’m hoping to try and get them on skates, apparently his dad used to tap dance on skate. But they are old, obviously. 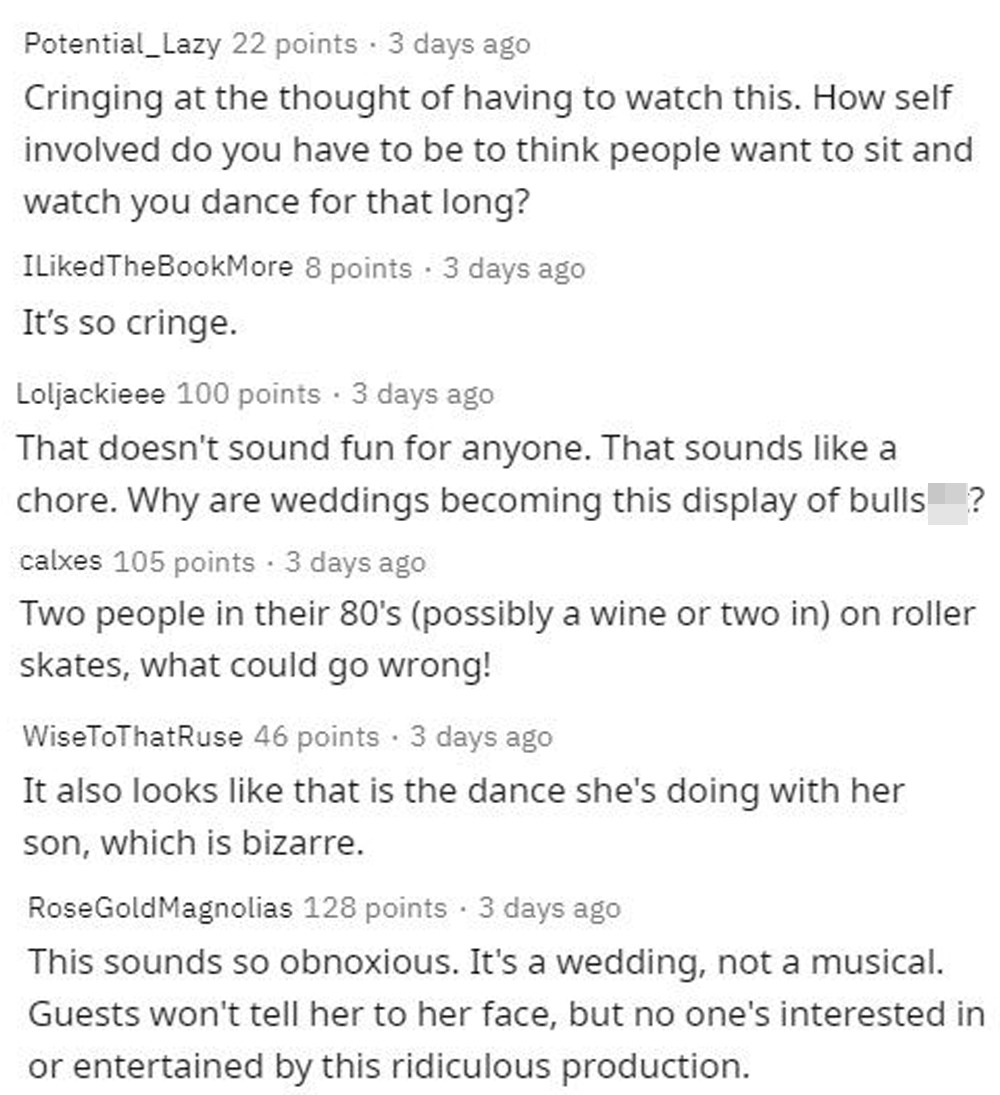 “They will only be about 2 and a half minutes.

“We’re also offering free Ballroom dance lessons before the ceremony and line dances during the cocktail hour for guests. They will not get bored.”

The post racked up hundreds of comments online, as people branded the dance numbers ‘cringeworthy’.

One person said: “Cringing at the thought of having to watch this. How self involved do you have to be to think people want to sit and watch you dance for that long?”

Another wrote: “That doesn't sound fun for anyone. That sounds like a chore. Why are weddings becoming this display of b******t?”

A third commented: “This sounds so obnoxious. It's a wedding, not a musical. Guests won't tell her to her face, but no one's interested in or entertained by this ridiculous production.”

This person thought: “Two people in their 80's (possibly a wine or two in) on roller skates, what could go wrong!”

While another wrote: “Sounds like somebody's mad that no one ever wanted to go to her dance recitals, so she's taking advantage of her captive audience to make sure they all have to watch every minute.”

And this horrified bride buys her dream wedding dress online… but the £60 gown looks VERY different when it turns up.

Plus horrified people slam ‘gross’ wedding dish of eggs with peanut butter and JAM & they hate it came on a paper plate too.

Meanwhile this bride horrifies people by wearing a see-through dress so sheer you can see her suspenders.

How does sperm donation work in the UK and do you get paid?